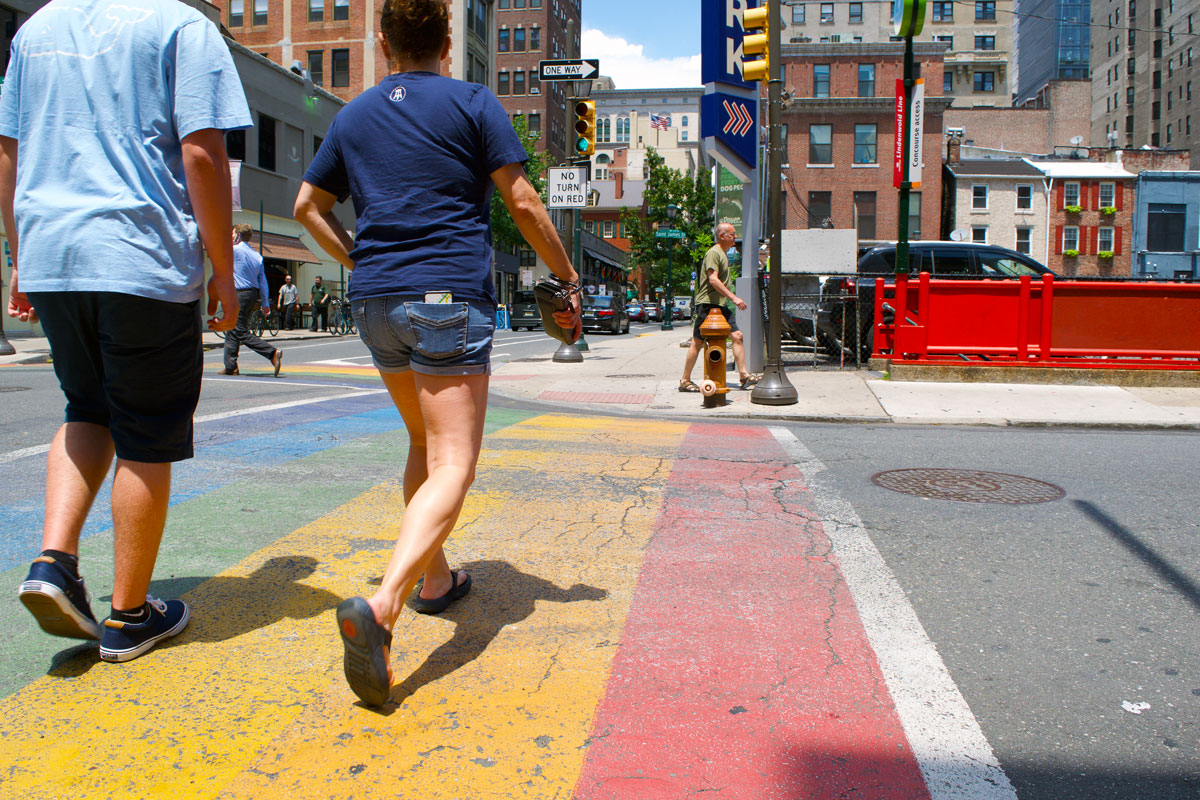 ‘I Never Saw Myself In The Rainbow’

In the Washington West neighborhood, commonly known in Philadelphia as the “Gayborhood,” the summer heat beats down on the rainbow-colored pavement at the intersection of 13th and Locust. Typical pride flags, created in 1979, fly with the breeze outside many storefronts.

The neighborhood is known for its LGBTQ-friendly bars and businesses, and is considered by some as the epicenter of acceptance. But city resident Abdul-Aliy Muhammad said the pride flag isn’t a welcome sign for him.

“I never saw myself in the rainbow,” Muhammad said. “I never carried around a rainbow flag ‘cause I saw it as a white symbol.”

Muhammad is an organizer for the workers’ rights group the Black and Brown Workers Collective, and identifies as black, muslim, and non-binary; someone who does not embrace a male or female gender.

Muhammad prefers the pronouns “they, them.”

There have been calls for more inclusion in the Gayborhood for years, but it came to the forefront when the owner of a popular gay bar, iCandy, was caught on camera using a racial slur to refer to African Americans.

Soon after, the city created a new Mayoral LGBT Commission and appointed a bisexual woman of color, Amber Hikes, as the executive director of the Office of LGBT Affairs.

On June 8, 2017 the city introduced a redesigned pride flag with added black and brown stripes. The goal was to promote inclusiveness within the LGBTQ community.

The redesign has gotten mixed reviews.

by Taylor Allen | Next Generation Radio 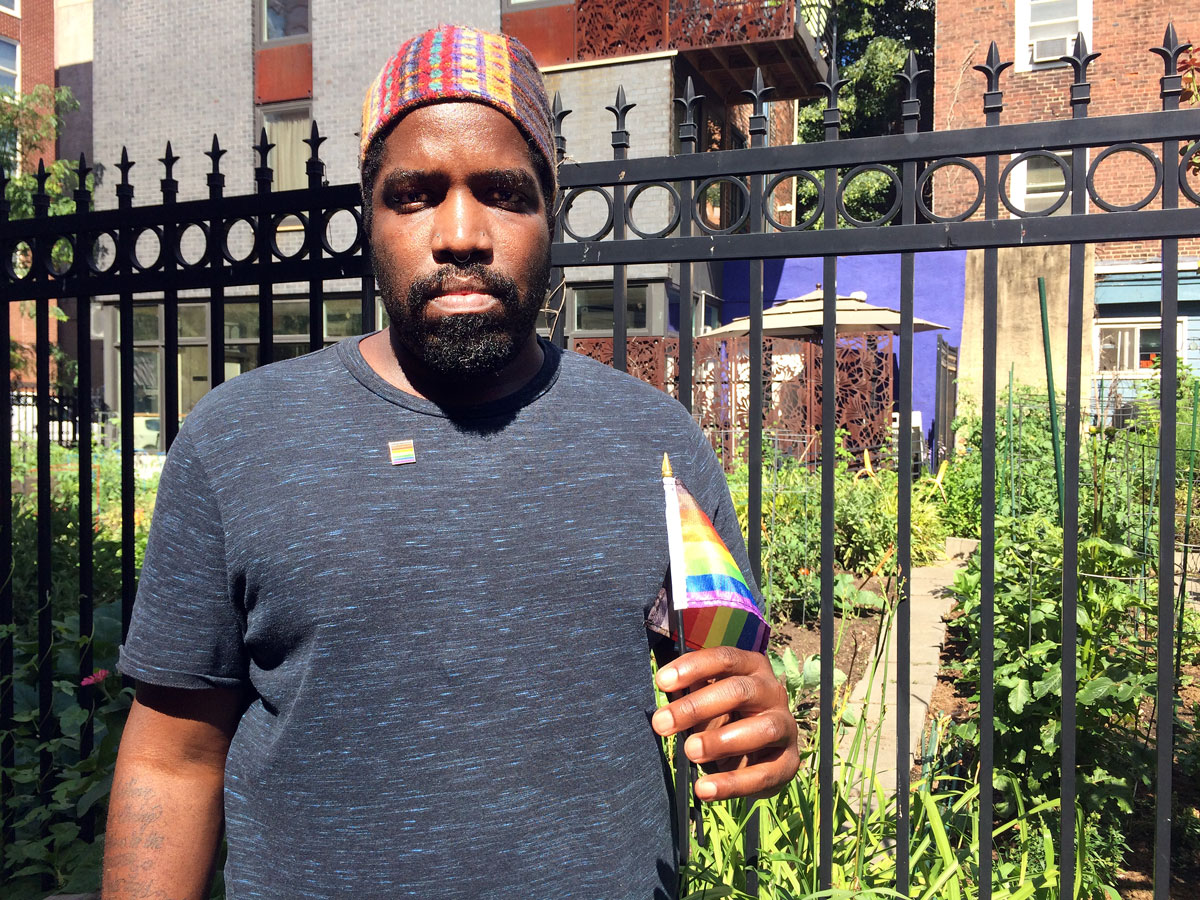 Abdul-Aliy Muhammad, of the Black and Brown Workers Collective, a Philadelphia workers’ rights group. The group wants to ensure people have places to work in ways that benefit their community. They are an outspoken supporter of Philadelphia’s new redesigned flag.

“I remember reading a book called an anthology, called “For Colored Boys”, which was stories, essays, anecdotes from black and brown queer and trans people… and one specific essay talks about the rainbow and how it’s not inclusive enough and it’s not enough for us and it doesn’t represent us.”

Shani Akilah, a non-binary person of color, is the cofounder of the Black and Brown Workers Collective, and also prefers the pronouns they and them.They said incidents such as Muhammad’s will continue if Philadelphia’s promises of solidarity to LGBTQ people of color are not properly executed.

“I think what Philly can do on a basic level is enforce the policies that are now being put on the books,” Akilah said. “So when we have council member Derek Green introduce an anti-racism policy that has the potential to shut down businesses that are found to be discriminatory, now they have to enforce that.” Others said the pride flag is already inclusive and adding two extra colors makes the symbol redundant.

Julieska Morales-Nieves is a 21-year-old, bisexual, Puerto Rican resident of Philadelphia. She recognizes the city’s gesture is for people like her, but does not feel like the move was necessary.

“I think the pride flag has always been representative of everyone in the LGBTQ community,” Morales-Nieves said. “If you are LGBTQ, then you are represented.”

She said no group should be singled out.

Others argue the new symbol can be the beginning of change for the better.

Brian McGinnis is a board member for the Independence Business Alliance, Philadelphia’s LGBTQ Chamber of Commerce.

“I think [the flag] is a great first step for the conversations we need to have,” McGinnis said. “LGBTQ people have already been marginalized. Queer people of color have been even more marginalized.”

“Symbols aren’t enough,” he said. “They are something, but you have to put them with action.”

Teri Gerbec, designer of the flag and creative director of the communications firm Tierney, said she knew her work would be controversial.

“Often, the negative reactions tend to bubble up, but there have been many, many positive reactions,” Gerbec said. “Someone who works here heard from her brother — who she hadn’t spoken to in some time — and he said for the first time he felt recognized as part of that community.”

Gerbec decided to be involved after Nellie Fitzpatrick, the former Executive Director of LGBT Affairs, came to Tierney last year to discuss LGBTQ rights in the city.

Gerbec said she was moved by Fitzpatrick’s presentation and immediately wanted to help.

Gerbec and her team at Tierney originally wanted to highlight problems of discrimination surrounding trans women of color but then the discussion broadened to address discrimination against people of color in the gayborhood. The flag was one of the many ideas proposed.

“This could make a statement,” Gerbec said. “This could encourage people to start a dialogue that needs to be happening.”

Gerbec said although not everyone is supportive of the flag, she still feels successful because people are engaged and people are talking about it.

Philadelphia is the only city to redesign the pride flag specifically for LGBTQ people of color as of June 29. 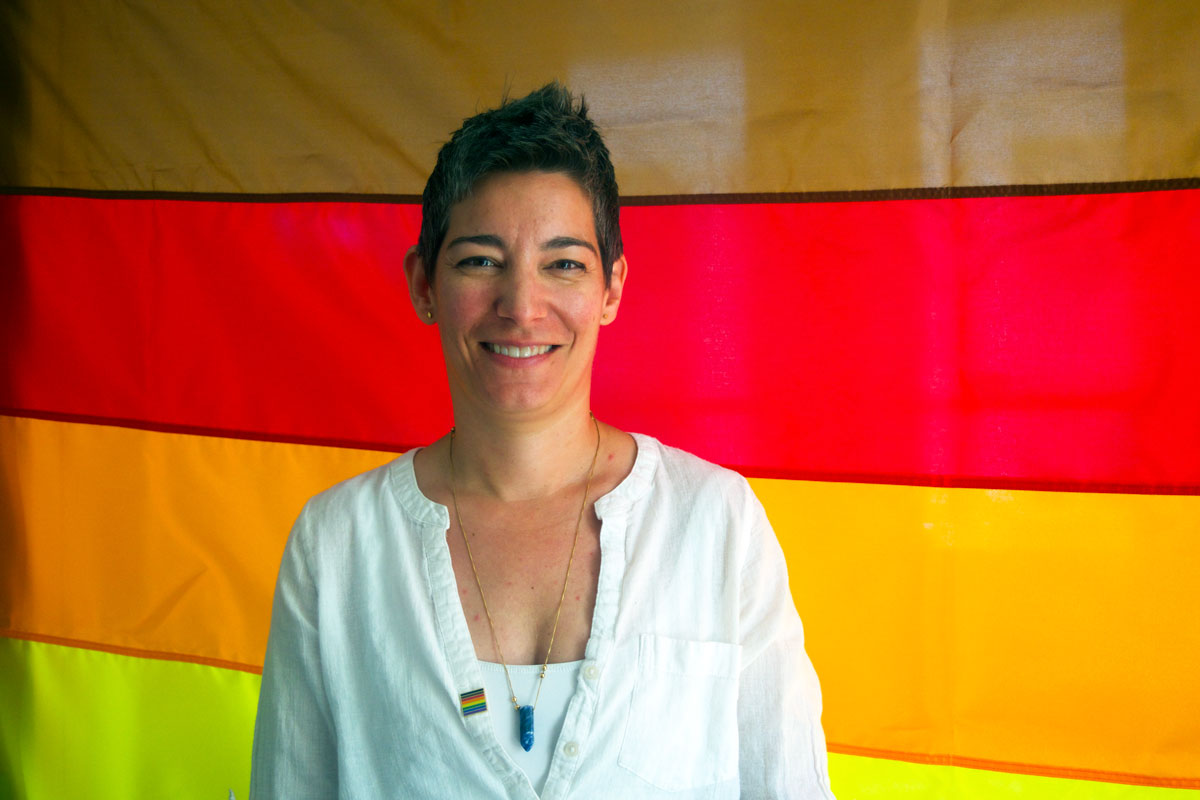 Teri Gerbec, creative director with the communications firm Tierney, designed Philadelphia’s new LGBTQ pride flag which adds black and brown stripes. The change is part of an effort to signal the city’s commitment to inclusiveness.